Nothing new under the sun – More lies spread by the #Israel lobby Inc.

In recent days, pro-Israel blogs have been published articles accusing me (guess what) of being a Holocaust denier. This happened because in 2006 I participated in the Holocaust Cartoon Contest that had been set up by the House of Cartoon in Tehran. This contest was a response to the Prophet Mohammed cartoons that had been published by the Danish newspaper Jyllands-Posten and was intended to test the Western limits of the freedom of speech. This new smear campaign was launched by Zionist bloggers due to some cartoons I had made for the activist group Code Pink for use in the Occupy AIPAC protests. It was intended to pressure the group into not using the artworks which were made by me, a so-called “Holocaust denier”.

They say, among other things, that I am a Holocaust denier, but fail to prove their point. In the article, reproduced ad nauseam by them, there is not one article, opinion or cartoon made by me where I deny the existence of the Nazi Holocaust. It’s because I have never made such cartoons. These bloggers are trying to apply the old “a lie repeated many times over becomes a truth” tactic.

Regarding the Holocaust Cartoon Contest, here are the three cartoons I submitted:
(Click on images to enlarge)

With this one I won 2nd place in the contest: 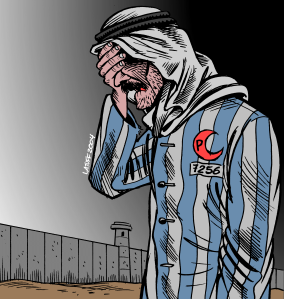 In the first two cartoons, I deal with the red lines of Western freedom of speech. Drawing derogative cartoons about Islam or the Prophet Mohammed is seen as freedom of speech, the same can’t be appplied when dealing with the Holocaust.
The third cartoon shows a Palestinian wearing a Nazi concentration camp uniform, surrounded by an Israeli “security fence”. Actually it has nothing to do with denial. On the contrary, this cartoon affirms the existence of the Holocaust and compares the treatment given to Palestinians by Israel with the treatment given to the Jews by Nazi Germany. I challenge anyone anywhere to show me a single cartoon, article or opinion by me that denies the Holocaust.
This incident is, in fact, another chapter in a long term campaign against me by the same groups and individuals siding with Israel and its criminal policies. They know the effectiveness of political cartooning in exposing Israel’s human rights violations against Palestinians. Since they can’t censor all the progressive blogs, websites, and social platforms, which reproduce my artworks freely, they try hard to attach labels such as “anti-Semite” and “Holocaust denier” in order to discredit and attempt to criminalize my views in the public eye.
Such campaigns won’t intimidate me. I will continue to stand up for the rights of Palestinians and I will continue to put my art at their service.

This entry was posted on March 5, 2012 by latuffcartoons. It was filed under Cartoons and was tagged with AIPAC, cartoons, Code Pink, Holocaust, Israel, Latuff.