Cartoon I made for Bahraini activist Abdulhadi al-Khawaja being used by women today in Manama, according @SAlwadaei

Cartoon I made for Bahraini activist Abdulhadi al-Khawaja was used by protesters yesterday.

(Associated Press) Anti-government protesters approach riot police holding pictures of a jailed opposition human rights activist Saturday, April 14, 2012, outside the British Embassy in Manama, Bahrain. Dozens gathered in support of Abdulhadi al-Khawaja, who has been on a prison hunger strike for more than two months. Police, who blocked surrounding roads, dispersed the demonstrators with sound grenades. The Arabic on the banner worn by the woman at center reads: “freedom or martyrdom.” 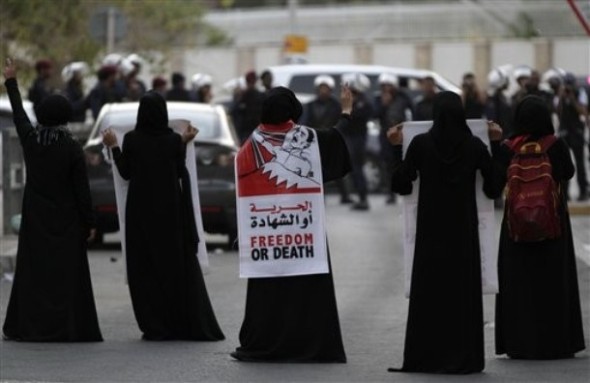